Conference play has finally arrived for most, if not all teams from across the country. With the beginning of conference games comes a second chance for those players and teams that have been struggling. It also provides the opportunity to build upon a hot start for the ones who are doing well. It was another exciting week of games, wins, accomplishments, awards, hits and yes even a no-hitter. Things are getting good from coast-to-coast with our Firecrackers Rico Alumni, so let’s look around the nation and see what went down last week. 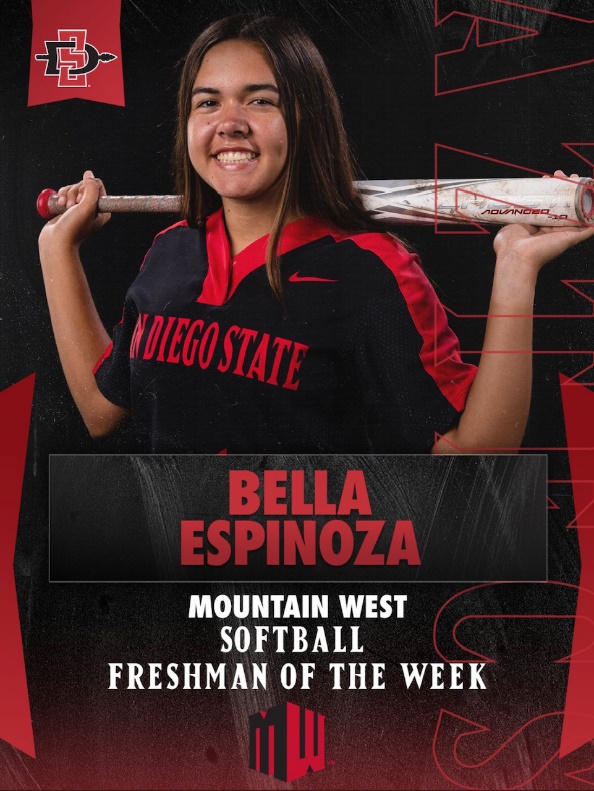 Let’s start things off on the west coast down in San Diego, California with the RED-HOT Bella Espinoza (2021) at San Diego State. The talented lefty-slapper went 6 for 10 (.600) with five runs scored as the Aztecs swept Colorado State to open Mountain West Conference play for 2022. For the third time this season, Espinoza was honored by being named as the MWC freshman of the week. An amazing feat to accomplish is such a short period of time. With the six-hit weekend against the Rams Bella pushed her batting average up to an impressive .409 for the season. Getting on base has proved valuable for both Espinoza and the Aztecs with Bella having scored 23 runs and stealing 10 bases leading San Diego State to a 19-10 record and the 3-0 start in the MWC.

Firecrackers Softball: You are off to an amazing start and are making college softball look so easy. What is the secret and how are you doing it?

Bella Espinoza: I feel like my preparation for the games starts in the beginning of the week with practice. Practice helps me physically and mentally prepare for the upcoming weekend so when game time comes I am ready to go. When I get out on the field I remind myself what my role is and to stick to the plan when I am at the plate hitting. I remember to take deep breaths, play calm and have fun.

Firecrackers Softball: You have been batting a lot of lead-off lately. Do you prefer leading off or batting down in the order? While on the topic of preference, would you rather play second base or be in the outfield?

Bella Espinoza: I really like batting leadoff because I feel like I can set the tone for our team by applying pressure on the defense. Right now, I am switching off between second base and the outfield. I feel I am learning to like the outfield a little more because I feel more of a sense of calmness out there. Either way though I love making plays behind my pitcher.

In Princeton, New Jersey right-handed pitcher Alexis Laudenslager (2019) was terrific in the circle this past weekend for the Princeton Tigers against Ivy League foe Brown University. She was honored with Ivy League Pitcher of the Week for her performance. On Sunday, the 5’10 junior from Scripps Ranch High School in San Diego pitched a gem, throwing a complete game no-hitter and striking out ten while surrendering one walk during a 2-0 victory over the visiting Bears. A two out base-on-balls in the top of the fourth inning was the only blemish on an otherwise perfect day for Laudenslager. The no-hitter topped off a weekend where Alexis didn’t give up a single hit to Brown over eleven total innings pitched, allowing her to earn two wins while striking out 17 Bears.

Firecrackers Softball: Congratulations! A no-hitter on the first weekend of Ivy League play. Can you explain how it felt and if you had any nerves late in the game?

Alexis Laudenslager: Many of my teammates have waited years to play in an Ivy League series so there were certainly a lot of nerves going into the weekend. Fortunately for me, I pitched four innings against Brown on Saturday and was able to get comfortable with the in-game conference pressure as well as picking up some tendencies of the Brown hitters. Going into Sunday I knew that Brown would be invested in the game and try to avenge their previous loss, so I needed to set the tone for my team that we were going to win the game. For most of the game I was extremely focused on throwing my best pitch and having a strong, competitive presence. However, in the last two innings the thought crept into my mind that I was throwing a no-hitter and I was only a few outs away from completing it. Rather than letting it occupy my headspace, I kept reminding myself that whether I give up a hit or not the only thing that truly matters is keeping my team in the lead. That thought helped to ease the nerves until the final out of the game. The count was 2-2 when I started to get excited. I threw a few pitches that were fouled off before I finally got the swing and miss on a drop ball outside. Atter that it was all hugs with my teammates and us celebrating another Ivy League win.

Firecrackers Softball: With the high academic standards at Princeton how difficult is juggling softball with your studies?

Alexis Laudenslager: It can be difficult to balance academics and softball during the season and I am learning how to do so now. After a nine-game trip during spring break I came back to six problem sets due in one week. This is certainly more work than I typically have, and it took a lot of communication with my professors to make sure that I would be able to submit my best academic work while being able to still give it my all-in softball. My major (Mechanical and Aerospace Engineering) is quite demanding as far as hours I put in each week, and I meet with my instructors on a regular basis to make sure I am learning the material as efficiently as possible. During the season my teammates and I take it one day at a time, with softball being our main break from school. Though my schedule is very busy it is all worth it to be studying what I love and grinding towards winning a championship with my teammates.

Duke University softball joined the ACC for the 2018 season, jumping right into the fire in their first official year of existence. The struggle was real for Duke in their first two seasons, but in 2021 Duke broke through and won the conference tournament. And now in 2022 the #7 ranked Blue Devils are rolling with a 23-4 record. Super senior Rachael Crabtree has been with the program since day one and has been a major part of the success at Duke. Crabtree, from Edison High School in Huntington Beach, has started off her final conference season with a bang. Over the first two weekends of ACC competition Rachel is 7 for 16 (.466) with two homeruns and six RBIs helping Duke jump out to a 5-1 start. On the season Rachel is batting .348 with seven homeruns and 21 runs batted in.

Firecrackers Softball: You have had two great weekends to begin ACC play while belting two home runs in a couple of wins over Clemson. What is your mindset when you are hitting the ball well and how do you stay focused during tough conference games?

Rachel Crabtree: My mindset is to keep it simple, see the ball, and hit ball. It is easy to over complicate things when pitchers are throwing three different speeds with movement. My only goal when I step into the box is to hit the ball hard no matter where the pitch is and let the rest take care of itself. Before every game we spend a lot of time during the week going through our plan for those games both offensively and defensively, so when we get into those tough moments we feel prepared and just go out and compete.

Firecrackers Softball: You have been with Duke since the beginning. How do you think this program has evolved and are you happy with where it is headed?

Rachel Crabtree: This program has matured over the last five years. We now have a huge upper class that has basically been through all the ups and downs as the program has grown. Coach Young, from day one, has instilled how important culture is and it has grown stronger each year. I am excited to see where Duke Softball goes in the coming years while reflecting on how far we have come in only five years. We have a lot of under classman that will pick up right where we left off and continue to make this a dominate, competitive program not only in the ACC but nationally.